The Gharana Of Maihar

The Gharana Of Maihar

Just after the uprising in 1857, Wazid Ali Shah, the ex-Nawab of Oudh, moved to Calcutta with all the musicians of his court. Kalve Ali Khan, the Nawab of Rampur, wanted to have a great musical community. He called many of Wazid Ali’s musicians to Rampur, where Bahadur Hussain Khan, a sursringar-player of the Senia Gaharana, and a dhrupadiya, who belonged to Saraswati’s (Tansen’s daughter’s) line and Amir Khan (1814-1873), a beenkar, founded the new darbar. Many other musicians moved to the new darbar, among others the khyaliya Bakar Ali Khan and Enayat Hussein Khan, the beenkar Mohammed Hussain, the sitariya Qutabdaula ( from Lucknow) and the sarangi player Bonizat Hussain Khan ( from Gwalior). Among their disciples was the Nawab itself and his younger brother, Haider Ali Khan, too.

Wazir Khan (1851-1926), the son of Amir Khan, was teaching in Calcutta and Midnapur for a while, before joining the court of Rampur in 1900, where he became the master of the Nawab, Hamid Ali Khan. While he was in Rampur, he started teaching Alauddin Khan for the sake of the Nawab.

Allauddin Khan was born in Shibpur village in Brahmanbaria, in present-day Bangladesh, the son of Sabdar Hossain Khan, also known as Sadhu Khan. Alluddin’s elder brother, Fakir Aftabuddin, first taught him some music in the home.

At the age of ten, Allauddin ran away from home to join a jatra band, a traditional Bengali form of theater. This experience exposed him to the rich folk tradition of Bengal. After some time, he went to Kolkata, and was accepted as a student by singer Gopal Krishna Bhattacharya, alias Nulo Gopal. Allauddin committed to a 12-year practice program; However, Nulo Gopal died of plague after the seventh year. Khan then became a disciple of Amritalal Dutt, a close relative of Swami Vivekananda and music director at Kolkata’s Star Theatre, with the goal of becoming an instrumentalist. At this time, he also took lessons in European classical violin from a Mr Lobo, a bandmaster from Goa.

Alauddin Khan got interested in sarod after a concert at Jagat Kishore Acharya’s, zamindar of Muktagachha, where he listened to Ahmed Ali Khan, a student of Asghar Ali Khan (Amjad Ali Khan’s grand-uncle). Alauddin became his student, and studied the sarod under him for five years. His next step was to go to Rampur for lessons from the beenkar Wazir Khan, court musician of the Nawab there, and one of the last direct descendants of the legendary Tansen. Through him, Alauddin was given access to the Senia Gharana (Tansen school of music), arguably north India’s most coveted body of musical knowledge. He later became the court musician of Brijnath Singh Maharaja of Maihar Estate in Central Province.

During his time as a court musician, Allauddin Khan completely reshaped the Maihar Gharana of Indian classical music. The Maihar Gharana was established in the 19th Century, but Khan’s contribution was so fundamental that he is often thought to be its creator. This was a period of rapid change for Hindustani instrumental music, thanks not least to Allauddin Khan, who infused the beenbaj and dhrupad ang, previously known from the been, surbahar (bass sitar) and sur-sringar (bass sarod), into the playing of many classical instruments.

For though he gave concerts on the sarod, Allauddin played many instruments, something that shaped his pedagogy. He put together an orchestra with Indian instruments, the Maihar String Band, and while his son, Ali Akbar Khan, was taught the sarod, his daughter Annapurna Devi learned the surbahar, students such as Ravi Shankar and Nikhil Banerjee played the sitar Rabin Ghosh on violin and Pannalal Ghosh the bansuri. Of course Ravi and Ali Akbar Khan were to be very famous and spread this gharana over the world – something that Allauddin himself had started when, in 1935–1936, he went on an international tour with Uday Shankar’s dance troupe.

Allauddin stayed at Maihar from 1918 to his death. In 1955, he established a Maihar College of Music. He was given the Sangeet Natak Academi Award in 1952, and the Padma Bhushan and Padma Vibhushan – India’s third and second highest civilian decorations – in 1958 and 1971, respectively.

When many people hear the name Allauddin Khan, they think of a grumpy old man (after all, he lived to 110) with a hot temper but a heart of gold – anecdotes about him range from throwing a tabla tuning hammer at the Maharaja himself to taking care of disabled beggars. (Nikhil Banerjee said that the tough image was “deliberately projected in order not to allow any liberty to the disciple. He always had the tension that soft treatment on his part would only spoil them”.)

Allauddin was a very religious man, and though Muslim by name, was strongly devoted to the goddess Saraswati, in the form of Sarada Devi, to whom there stands an old and famous temple atop a hill in Maihar. This is why Allauddin, despite more lucrative offers from other courts, never left Maihar, refusing to move away even for hospital treatment – he would rather die near Sarada Devi than live someplace else.

A few years before the turn of the century, he married Madanmanjari Devi (1888–?). He had one son and sarod heir, Ali Akbar Khan, and three daughters, Sharija, Jehanara and Annapurna Devi. After Sharija got married, and her jealous mother-in-law burnt her tanpura, Allauddin decided not to train his other daughters, but Annapurna proved so talented he changed his mind. She later married and divorced Ravi Shankar.

Ustad Allauddin Khan’s son, Ali Akbar Khan and his daughter, Annapurna Devi grew up in Maihar. Ravi Shankar, who started to learn from Gokul Nag (Vishnupur Gharana, Calcutta), Sharan Rani, Pannalal Ghosh, Timir Baran and Nikhil Banerjee  (who joined in 1947 only), they both became the leader musicians of the gharana. 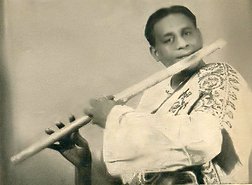 Pannalal Ghosh was born on July 31, 1911. Born in Barisal, East Bengal now Bangladesh the family first lived in the village of Amarnathganj and later moved to the town of Fatehpur.He was brought up in a family of musicians. His grandfather, Hari Kumar Ghosh, father, Akshaya Kumar Ghosh, and maternal uncle, Bhavaranjan, were proficient musicians. Mother, Sukumari (daughter of Mr. Mazumdar of Dhaka), was a singer. His younger brother Nikhil Ghosh was a distinguished tabla player. Young Pannalal was highly receptive and absorbed good music from various sources. He regarded the “Harmonium Wizard”, Khurshid Ahmad Khan, as his first guru, and was fortunate also to have had the blessings and systematic training from the legendary Ustad Allauddin Khan, with whom he studied, beginning in 1947.

As the music director of the dance troupe of the princely state of Seraikella, Pannalal Ghosh visited and performed in Europe in 1938, and was one of the first classical musicians to have crossed the boundaries of India.

After joining All India Radio, Delhi, as Conductor of the National Orchestra in 1956, he composed path-breaking orchestral pieces such as Kalinga Vijay and Andolika. His contribution in semi-classical as well as film music also was equally significant, and his name is permanently linked to many famous movies such as Aandolan, Anjan, Basant, Basant-Bahar, Duhai, Munna, Mughal-e-Azam, Police and Nandkishor.

He also mastered the technique with such a great proficiency that he could present with ease the heavy ragas like Todi, Darabari, Miyan Malhar, Puriya, Shri, Puriya Dhanashri, Kedar, etc., retaining intact the entire beauty as well as the grammar. These ragas are now the speciality of the flautists of his Gharana. He also created and popularized several new ragas including Deepawali, Pushpachandrika, Hansanarayani, Chandramauli, Panchavati and Noopurdwani.

Nikhil Banerjee was born in Calcutta into a Brahmin family, where music as a profession was discouraged, although his father, Jitendranath Banerjee, who was a Sitarist by his hobby, taught him on the instrument. Young Nikhil grew into a child prodigy, won an All-Bengal Sitar Competition at the age of 9 and soon was playing for All India Radio. At the time, his sister was a student of khyal great Amir Khan, who became a life-long influence. Jitendranath approached Mushtaq Ali Khan to take the boy as a disciple, but was turned down; instead Birendra Kishore Roy Chowdhury, the Zamindar of Gouripur in present-day Bangladesh, was responsible for much of Nikhil’s early training.

In 1947 Banerjee met Allauddin Khan, who was to become his main guru. Allauddin played the sarod but taught artists who played all kinds of instruments; Banerjee went to his concerts and followed him around, and in the end even went so far as to threaten to kill himself if he was not accepted as a disciple. Allauddin did not want to take on more students, but changed his mind after listening to one of Banerjee’s radio broadcasts.

The discipline under Allauddin Khan was legendary. For years, Nikhil’s practice would start at four in the morning, and with few breaks continue to eleven o’clock – at night – a schedule which was naturally hard on his fingers. Obviously, what Allauddin was passing on to most of his students was not playing technique but the musical knowledge and approach of the Maihar Gharana; yet there was a definite trend in his teaching to infuse the sitar and sarod with the been-baj aesthetic of the rudra veena, surbahar and sursringar – long, elaborate alap (unaccompanied improvisation) built on intricate meend work (bending of the note). Under his teaching, Shankar and Banerjee developed different sitar styles, but to the uninitiated, Banerjee will sound like Ravi Shankar, due to the fact that in Nikhil sporadically also learned from Ravi Shankar whenever he got a chance. They played similar sitars, both with bass strings.

After some five years in Maihar, Banerjee embarked on a concert career that was to take him to all corners of the world and last right up to his death. All through his life he kept taking lessons from Allauddin and his children, Ali Akbar and Annapurna Devi. Perhaps reflecting his early upbringing, he always remained a humble musician, and was content with much less limelight than a player of his stature could have vied for. For him, music-making was a spiritual rather than a worldly path. Even so, in 1968, he was decorated with the Padma Shri and posthumously received also the Padma Bhushan; at the time of his death by heart attack, he was a faculty member at the Ali Akbar College of Music in Calcutta, but had not yet significantly taught any disciples of his own.

He created a raga Manomanjari of his own, mixing ideas from Kalavati and Marwa.

some representatives of the Gharana: 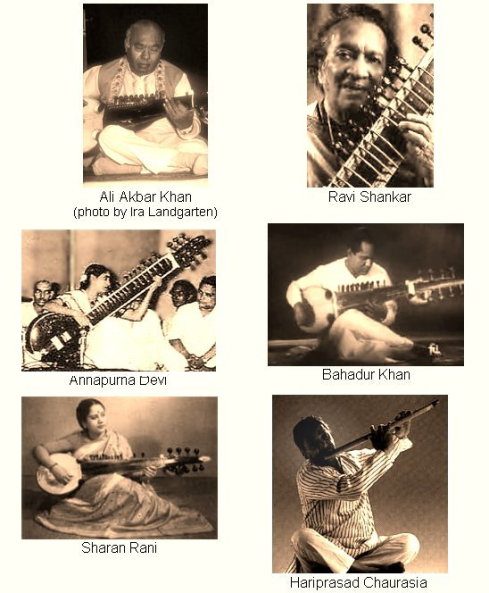 Ram51 is a researcher in the various fields of Musicology, Philosophy and History as well as old languages. One of his first topics is the wide scope of Indo-arabic cultures as represented in various art-forms religion and history. Below a list of selected Research topics which sum up partitionally the task of anthropological Frameworks in totaliter : Sanskrit Hinduism and Mythology Hindustani Music, The Muqhal Empire Gharanas from North India Kashmir Sufiyana The Kashmir Santoor Traditional Folk Music from USA Philosophy in Orient and Okzident Genealogy of musical instruments Ethnomusicology, Arabic Maqams, No Theatre fromJapan, North american poetry, Cultural heritage of mankind and Islamic architecture... END_OF_DOCUMENT_TOKEN_TO_BE_REPLACED
This entry was posted on Monday, February 24th, 2014 at 01:42 and tagged with cytopicus, ram51, The Gharana Of Maihar and posted in The Gharanas of India. You can follow any responses to this entry through the RSS 2.0 feed.
« In The Half Shadow of The Dove – Lectured rAgams For The Early Evening
The Gharanas of India »